Up on the blog today, we have a 1977 "not so missing" card for former Houston Astros pitcher Paul Siebert, who was coming off his third Big League season when this card would have seen the light of day: 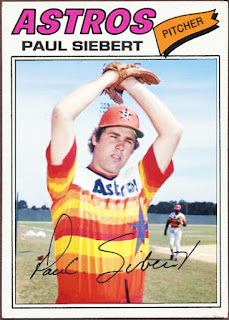 Siebert pitched well for the Astros in 1976 in limited play, appearing in 19 games out of the bullpen and going 0-2 with a decent 3.16 earned run average over 25.2 innings.
The following year he'd find himself starting the season with the San Diego Padres before finding himself traded to the New York Mets in June as part of the (in)famous Dave Kingman trade.
Combined he'd go 2-1 over 29 appearances that season, with an ERA of 3.69 in 31.2 innings, again all out of the bullpen.
Siebert then appeared in 27 games for the Mets during the 1978 season, posting an 0-2 record with a 5.14 earned run average with a single save over 28 innings of work.
The 1978 season would be the last taste of big league ball for Siebert, closing out a five year career that saw him go 3-8 with a 3.77 ERA over 87 games and 129 innings pitching for the Houston Astros, San Diego Padres and Mets.
Posted by John23 at 5:22:00 AM