HAPPY THANKSGIVING ALL! I hope you're all safe and well this morning!

Today's "dedicated manager" card is a 1975 edition for the great Yogi Berra, who was at the helm of the New York Mets when this beauty would have hit packs before the '75 season: 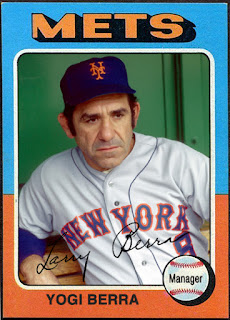 Berra was coming off a disappointing 1974 season that saw the reigning National League champs fall from first to fifth after a World Series loss in 1973 to the Oakland A's.
Turns out the 1975 season he would be let go about three quarters into the year, having the Mets in third place with a record of 56-53. Not exactly a horrible year, and ironically winning at a higher clip than their 1973 season when the team made the World Series with a record of only 82-79.
Berra wouldn't manage again until 1984 after years of coaching, coming back to the New York Yankees and guiding them to a record of 87-75, good for a third place finish.
The following season he'd be let go after only 16 games, with the Yanks at 6-10, which would be the last Managerial position of his long baseball career.
His only other manager spot was way back in 1964 when he led the Yankees to the World Series with a record of 99-63 before losing to the St. Louis Cardinals and Bob Gibson.
Little did Yankee fans know it would be the last time they'd be in the World Series until 1976 after an incredible run of Postseason berths the previous 40 some odd seasons.
For Berra, the Hall of Famer finished his managing career with a record of 484-444, good for a .522 winning percentage, with two pennants.
Posted by John23 at 6:12:00 AM