On the blog today, we have a do-over for Ken Brett and his 1972 card, which originally showed him as a member of his upcoming team, the Milwaukee Brewers, in one of those "cheeky" up-shots Topps was prone to using back then: 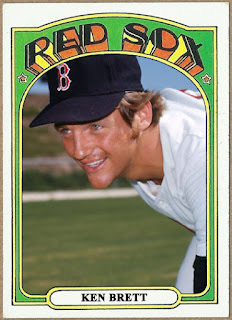 Here's the original as-issued card for those that need a refresher: 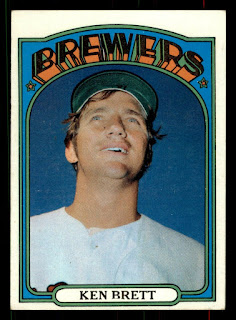 After parts of four seasons with the Boston Red Sox, Brett found himself as part of a blockbuster 10-player trade that had key players George Scott headed to Milwaukee while Tommy Harper come to Beantown.
Still only 23 as the season opened in 1972, he'd play for the Brewers one season before getting traded again at season's end.
In his one year in Milwaukee Brett would go 7-12 with a 4.53 earned run average over 26 appearances, 22 of them starts, with two complete games and a shutout in 133 innings of work.
He would go on to play 14 years in the Big Leagues, pretty much as both a starter and middle reliever between 1970 and 1981, his final year.
He’d finish with a record of 83-85, with an ERA at 3.93 over 349 appearances, 184 of them starts, with eight shutouts and 11 saves.
Of course, he’d have a younger brother named George who’d come up in the mid-70’s and end up making quite a name for himself, straight to the Hall of Fame!
I’ve always wondered where exactly the Brett family lived in Brooklyn, where Ken was born, since I too hail from there, more specifically Bensonhurst.
If anyone has any idea I would greatly appreciate the info, as I suspect they lived in Bay Ridge, but I really have no proof of that.
Anyone know?
Posted by John23 at 5:34:00 AM