On the blog today, we take a closer look at an unissued 1977 proof card for former outfielder Gary Matthews, who signed as a Free Agent with the Atlanta Braves after starting his career with the San Francisco Giants: 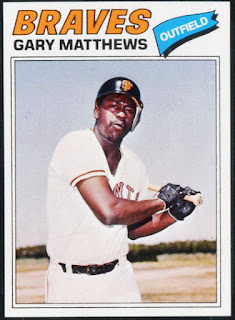 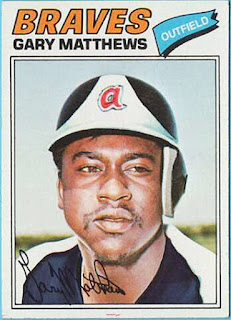 The former N.L. Rookie of the Year signed with Atlanta on November 17th of 1976, in time for Topps to airbrush him into a Braves Uni for the 1977 set.
n 1973, he would really make his mark, hitting an even .300 with 162 hits over 540 at-bats, with 74 runs scored and 58 runs batted in during the 1973 season.
Those numbers would be good enough to take home the N.L. Rookie of the Year Award, easily finishing ahead of the Montreal Expos Steve Rogers for top freshman honors.
It would pretty much be steady straight from there, as he’d go on to consistently put similar numbers up through his tenures with the Atlanta Braves, Philadelphia Phillies and Chicago Cubs until he’d retire after a brief stint with the Seattle Mariners in 1987.
By the time he left the game as an active player, he racked up a lifetime .281 average, with 2011 hits and 234 home runs to go with his 1083 runs scored and 978 RBI’s.
He’d also put in some excellent postseason performances, as he’d hit .323 over 19 games with seven home runs and 15 RBIs, including an MVP performance in the NL Championship series while with the Phillies when he hit three homers and drove in eight runs in only four games against the Dodgers, helping the “Wheez Kids” make it to the World Series.
Posted by John23 at 6:41:00 AM