On the blog this fine day, we add the great Negro Leaguer Vic Harris to my long-running "Negro Baseball Leagues All-Time Greats" thread: 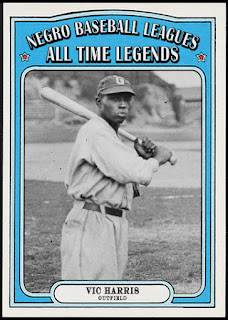 Harris' career spanned 26 years, between 1922 and 1947, playing and managing mainly for the Homestead Grays.
Over his extensive playing career he hit .305 while making seven All-Star teams, leading the league in runs once, doubles once and triples twice.
Known as one of the toughest players of his era, he also managed the Grays to eight first-place finishes, which is the most of any Negro league skipper, while winning a Negro World Series.
As manager, he finished with a career record of 547-278, good for a fantastic winning percentage of .663, including his incredible 1937 campaign when he led the Grays to a record of 60-19 with a ridiculous .759 winning percentage.
Only Hall of Famer "Bullett" Joe Rogan has a higher career winning percentage in Negro League ball as manager, finishing with a .698 figure, but in only 257 games to Harris' 547.
Sadly, Harris, though considered for Hall of Fame induction twice so far, he has not garnered the necessary amount of votes for enshrinement.
Hopefully this will change soon enough.
Posted by John23 at 6:44:00 AM