On the blog today, we spotlight by 1970 "In-Game Action" Bill Freehan card from my Series 1 set released a few months back: 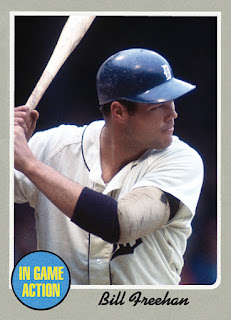 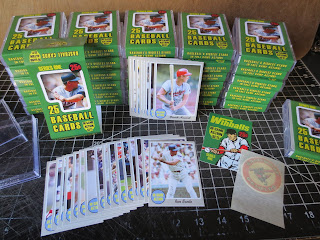 It's easy to forget that Freehan was an eleven-time all-star, five-time Gold Glover, and finished in the top-ten in M.V.P. voting three times, with a second place finish in 1968 behind teammate Denny McLain.
1964, his first full year in the Majors, was arguably his finest season, as he hit .300 for the only time in his career along with 18 homers and 80 R.B.I.'s.
But for the rest of his career Freehan put up solid numbers year after year, while taking care of a Detroit pitching staff that featured guys like McLain, Mickey Lolich and Earl Wilson.
He really was ahead of the rest of the pack as far as A.L. catchers during the decade.
A solid player through and through, he'd retire after the 1976 season with a .262 lifetime average, 200 homers and 758 runs batted in over 1774 games and 6073 at-bats.
As far as Major League catchers go, especially for that era, I feel he should be in the Hall, representing that era between Yogi Berra and Carlton Fisk in the American League.
Posted by John23 at 8:17:00 AM