Today’s “missing player” is Mark Schaeffer, he of one solitary season as a big league pitcher, 1972 with the San Diego Padres: 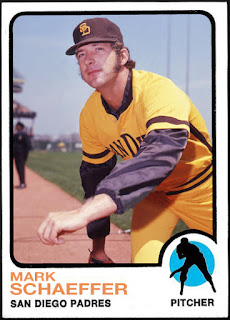 Schaeffer appeared in 41 games for the Padres, posting a 2-0 record with a 4.61 earned run average and 25 strikeouts in 41.0 innings of work with one save thrown in.
Oddly, I can’t find any action after that 1972 season on any level for him, Major or Minor. I wonder what happened? An Injury?
If anyone knows either way I’d love to hear it!
Regardless, hope you’re out there living the high-life Schaeffer!
Posted by John23 at 6:21:00 AM