Up on the blog today we have a "not so missing" 1975 card for former catcher Larry Johnson, whose Major League career was 12 games spread out between 1972 and 1978: 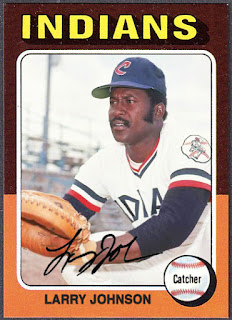 Johnson appeared in one single game for the Cleveland Indians in 1974, scoring a run without even being credited with a plate appearance.
It was his first MLB action since 1972 when he made his debut with one game, going 1-for-2 at the plate at the age of 21.
In 1975 he’d again appear in only one game, which must be a record for a player to appear in only one game over the first three years of his career.
This time that one game was with the Montreal Expos where he went 1-for-3 at the plate, hitting a double while driving in the first run of his career.
1976 would see him break that one-game streak when he appeared in six games for the Expos, collecting two hits over 13 at-bats for a .154 batting average.
But all that got him was another full-season in the Minors for 1977 before coming back, now with the Chicago White Sox, for what ended up being the last taste of the Big Leagues, playing in three games and going 1-for-8 at the plate, good for a .125 average.
He’d go on to play another four professional seasons, the last of which was in the Mexican League in 1982, before retiring for good.
All told, he finished his MLB career with a .192 average, with five hits over 26 at-bats in 12 games, with two doubles, an RBI and run scored.
Posted by John23 at 6:33:00 AM