On the blog today, we move on to the National League in my on-going "On-Card All-Star" thread where I slap a nice All-Star banner on a player's base Topps card from a particular year, and we begin with the great Hank Aaron at first base for the N.L.: 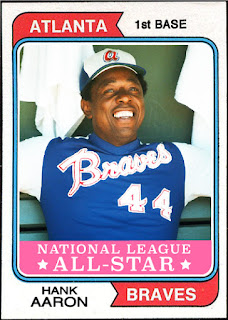 Of course I went and used my own Hank Aaron custom that I introduced on the blog a few months back, sticking with the base Topps design instead of the "special" that was originally used.
Just a great picture of the legend smiling, enjoying life, on his way to baseball history.
Of course all baseball talk was about Aaron at this time, with his overtaking Babe Ruth as the all-time Home Run champion as the 1974 season opened up, and rightly so!
The man was simply out of this world...
Let his numbers do all the talking: 2174 runs scored, 3771 hits, 624 doubles, 98 triples, 755 home runs, 2297 runs batted in, a .305 batting average no less than 21 all-star selections!
Just tremendous!
He also had eight top-5 finishes for MVP, including taking home the award in 1957, as well as three Gold Gloves won consecutively between 1958-1960.
It's incredible to look at his 15 years of topping 100 or more runs scored, 11 seasons of 100 or more runs batted in, five more seasons of 90+ RBI's, and TWENTY STRAIGHT years of 20 or more home runs.
Rest in Peace to one of the absolute greats of the game, Mr. Henry Aaron...aka "Hammerin' Hank"!
Posted by John23 at 6:22:00 AM