Today's blog post has a 1972 "not so missing" card for former reliever Ramon Hernandez of the Pittsburgh Pirates, who made it back to a Big League mound in 1971 after two years in the Minors: 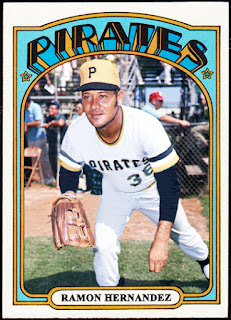 Hernandez fared well in his 10 appearances for the World Champs, going 0-1 with a sparkling 0.73 earned run average over 12.1 innings, with seven strikeouts while closing out seven games with four saves.
He'd be a solid arm out of the pen for the Bucs over the next four seasons, putting in sub-3.00 ERA's each year while averaging about eight saves and logging 21 wins along the way.
In 1976 he'd be traded to the Chicago Cubs, where he'd be into the 1977 season before playing what turned out to be the last games of his career as a Boston Red Sox player.
All told Hernandez finished with a career 23-15 record over nine seasons, with a nice 3.03 ERA over 337 appearances and 430.1 innings pitched, saving 46 games and striking out 255.
Posted by John23 at 5:34:00 AM