Here's a 1975 "Hall of Fame Induction" card for one of the greatest third basemen in Negro Leagues history, Judy Johnson: 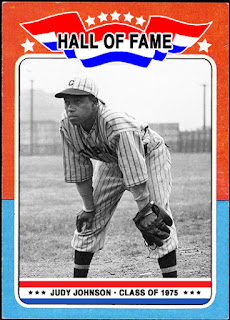 There's surprisingly little written about him considering he's a Hall of Famer, and I can find much more written about other Negro League players.
But what is known is that he starred in the Negro Leagues between 1918 and 1936, playing for the Hilldale Club, Homestead Grays and Pittsburgh Crawfords, playing alongside such players as John Henry Lloyd (who mentored the young Johnson) and Josh Gibson (who Johnson in turn mentored himself).
A two-time all-star in the league, he also won a Negro League title with the Hilldale club in 1925 and hit as high as .416 in a season (1929).
After his playing days he went on to scout and coach in the Majors, becoming the first African-American coach in Major League history after signing on with the Philadelphia Phillies in 1954.
Posted by John23 at 8:55:00 AM