The next Negro league great to get the spotlight here on the blog, perhaps the most important figure in early Black baseball, Sol White: 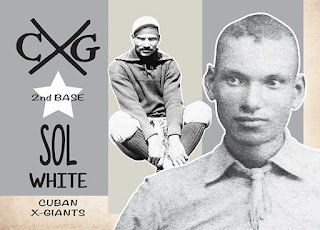 I first became aware of White when I was hunting down a copy of his incredible early book, “History of Colored Baseball”, from 1907.
From there I learned he wasn’t just a writer about early African-American baseball, but played as well.
According to various records and accounts, White’s playing career spanned about 20 years between 1887-1926, which included his managerial career as well, which started in 1902 when he founded, along with others, the Philadelphia Giants.
Between 1904 and 1907 he led the team to four straight Black Baseball Championships.
It was also in that time that he published his historical publication in 1907, a 128-page pamphlet that was given out at games during their season.
Beginning with the formation of the first black baseball team in 1885 and took readers up to 1907, with what was supposed to be a second edition to be published later on covering the game into the 1920’s.
Sadly this never materialized, leaving us with what could have been an incredible piece of documented history.
Nevertheless, if you want to read more of Sol White, you can easily read his Wikipedia entry, and also see the bibliography included to cover even more.
Totally worth the read and I strongly encourage it!
Posted by John23 at 6:21:00 AM