REVISITING AN OLD BLOG POST- NOVEMBER 6th, 2016: A "DREAM CARD" THAT NEVER WAS

Thought it'd be fun to revisit one of my favorite customs over the years, this one created back in 2016: a "fantasy" 1973 rookie card featuring three top-notch outfielders: 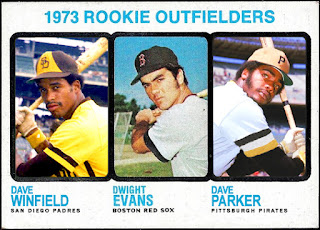 One player went on to the Hall of Fame, and the other two can be argued to be part of that posse.
I for one STILL say Dave Parker is a Hall of Famer!
Nevertheless, we know Winfield and Parker would actually have their rookie cards the following year in the 1974 set.
Evans was the only player of the three to appear on a multi-player rookie card in ‘73, and I left his part “as-is” and added the other two on either side of him.
It’s been stated that Parker and Winfield changed the ballplayer prototype when they entered the league. Huge, slugging athletes who could also run and play stellar defense.
Evans of course took a little longer to come into his own, but when he did he became of the game’s best in the early to mid 80’s.
All three had awesome Major League careers, with Winfield leading the way and ending up in the Hall of Fame.
But again, look at what those other two did on the ball field and tell me without question that they don’t deserve to be there.
It’s a tough argument for sure...
Would have been an awesome card to be chasing as a kid, as well as these days as a collector.
Posted by John23 at 5:52:00 AM