OK. Here’s one of my favorite “creations” for the blog, an ever-so-cool “not so missing” 1973 card for that shaded bad-ass bastard Lowell Palmer, who kept the funk going in 1972 with a split season between the St. Louis Cardinals and Cleveland Indians: 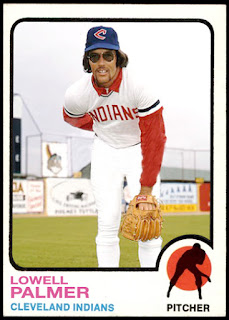 Lowell, who pitched the previous three years of his MLB career with the Philadelphia Phillies, found himself a member of the Cardinals when the 1972 year began, going 0-3 over 16 appearances, with a 3.89 earned run average in 34.2 innings of work.
After being selected off waiver by the Indians on September 18th, he appeared in one game, tossing two innings and allowing one earned run on two hits.
He’d spend all of 1973 in the Indians’ Minor League system before making it back for one last hurrah in 1974, now a member of the San Diego padres, going 2-5 with a 5.67 ERA over 22 appearances and 73 innings.
After a couple of more Minor League seasons in 1975 and 1977, he called it a career, finishing up with a 5-18 record, along with an ERA of 5.29 over 106 appearances and 316.2 innings pitched in five Major League seasons.
But of course his ever-lasting legacy as a Major League player were those cool baseball card photos, sporting the shades and exemplifying that sweet decade of the 1970’s.
Posted by Giovanni Balistreri/ WTHBALLS at 5:53:00 AM