I found another great image of Hall of Famer Duke Snider during his brief tenure as a Montreal Expos coach, so I wanted to create a 1975 edition to add to my 1974 version that I created a few years ago, so here goes: 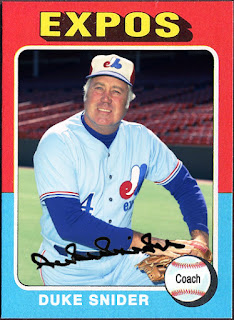 After a Hall of Fame career between 1947 and 1964, mainly slugging his way into the Brooklyn/Los Angeles Dodgers record books, Snider took on a successful role as a play-by-play analyst for both the San Diego Padres and Montreal Expos beginning in 1969 straight through to the late-80’s.
In between, during the 1974 and 1975 seasons, he was the Expos hitting coach, so why not create a coach card for the legend?
I may even go and create a 1976 edition as well in the near future if I can snag another image from the period.
Posted by Giovanni Balistreri/ WTHBALLS at 7:10:00 AM