The newest “Turn Back the Clock” card in my thread is a 1977 card celebrating the 10th anniversary of the great Mickey Mantle’s 500th career home run, which occurred on May 14th of ‘67: 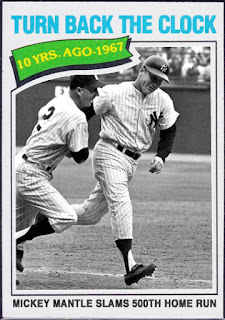 In the 7th inning of a Sunday game against the reigning World Champion Baltimore Orioles, Mantle slammed a two-out shot off of reliever Stu Miller to join the (then) exclusive club, on his way to a career 536 homers before he retired in the Spring of 1969.
He would top 50 homers twice during his 18-year career, along with four 40+ seasons and nine 30+ seasons, leading the league four times while also topping the Junior Circuit in runs scored five times and RBI’s once (during his Triple Crown 1956 campaign).
The 16-time all-star and three-time MVP became an American icon that still resonates today, as arguably the most popular subject in card-collecting and as beloved a New York athlete as anyone can name.
Posted by John23 at 6:54:00 AM