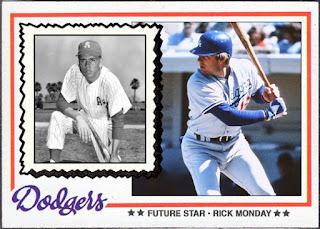 By 1978 Monday was a veteran player who was entering the second season with the Los Angeles Dodgers, the third and final team of his successful 19-year career that also saw him suit up for the Kansas City/Oakland A’s and Chicago Cubs.
Between 1966 and 1984 he would be named to two all-star teams and play in three World Series, all with the Dodgers, including the 1981 team that won it all against the New York Yankees.
Of course, if we’re taking about Rick Monday, we have to mention the moment he entered baseball (and American) folk lore when he snatched an American flag from two protesters (of what I have no clue) who jumped onto the field at Dodgers Stadium on April 25th, 1976 while he was still a member of the Cubs.
Monday, who was playing centerfield, ran over and grabbed the flag in full sprint and kept running, much to the crowd’s delight, until he handed the flag off to Dodger pitcher Doug Rau in front of the L.A. dugout.
Back to that 1965 amateur draft: after the outrageous bidding war for all-world amateur Rick Reichardt the previous year, which resulted in the Los Angeles Angels winning his rights to the tune of $200,000, Major League baseball felt something needed to be done, coming up with the draft that we all follow to this day.
Coming out of Arizona State University, where he led the team to a College championship (along with teammate Reggie Jackson) over Ohio State, he earned All-America and was named College Player of the Year as a sophomore.
This made him a natural pick for #1 in a somewhat light-year, as evidenced by the picks that followed him in Les Rohr (Mets), Joe Coleman (Senators) and Alex Barrett (Astros).
As a matter of fact of the first 20 picks, the most successful player besides Monday would arguably be either Ray Fosse (7th) or Jim Spencer (11th).
Have to point out that in the second round, the Cincinnati Reds picked a kid out of Oklahoma that would fare pretty well in the big leagues, Johnny Bench, the 36th overall pick!
Nevertheless, Monday went on to have a very nice career, finishing up with 1619 hits and a .264 lifetime average along with 241 homers and 775 runs batted in over 1986 games.
Posted by John23 at 5:55:00 AM