On the blog today, revisiting an old post from August 18th of 2014 celebrating the career of "Little Louie" Aparicio, Hall of Fame shortstop who wrapped up a brilliant career in 1974: 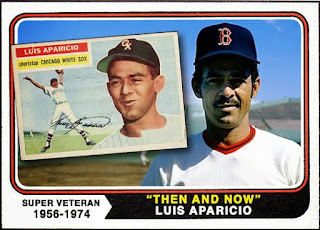 "Next up on my "Then and Now" Super Veterans thread is Hall of Fame shortstop Luis Aparicio.
He actually wrapped up his playing days by the end of the 1973 season, but Topps (for a change) went ahead and issued a card for him in their 1974 edition. So the card I designed was patterned after that year's set.
From the moment he made it to the Majors in 1956 with the Chicago White Sox, Aparicio was a star.
He took home the A.L. Rookie of the Year that season, and proceeded to be an all-star player for most of his 18-year career.
Between 1956 and 1964, nine consecutive years, he led the American League in stolen bases every single season!
As a member of the "Go-Go" 1959 Chicago White Sox he finished second to teammate Nellie Fox for Most Valuable Player, and he'd go on to win nine Gold Glove Awards before hanging up the spikes.
All told he suited up for the White Sox, Baltimore Orioles, and Boston Red Sox for the final three years of his illustrious career.
By the time he retired the numbers were solid: 2677 hits, 1335 runs scored, 506 stolen bases and over 10000 at-bats!
It took a few years on the ballot, but he was finally inducted into the Hall of Fame in 1984."
Posted by John23 at 6:22:00 AM