Now, today on the blog I may be stretching it a bit, but I’ll go ahead and add Milwaukee Brewers all-timer Robin Yount to my long-running 1975 “In-Action” thread: 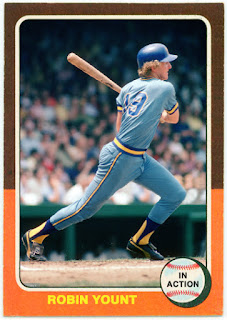 Yount just played the first season of his brilliant Hall of Fame career in 1974, bursting onto the baseball spotlight as an 18-year-old.
Incredibly, he performed admirably, hitting .250 with 86 hits over 344 at-bats, scoring 48 runs and driving in 26, making his Big League debut not even a year after being drafted third overall in the 1973 draft.
A Milwaukee Brewer for life, Yount finished his great career with 3142 hits, 1632 runs scored, 251 homers and 271 stolen bases, taking home two A.L. MVP Awards and incredibly only making three All-Star teams. How on earth?!
Anyway, it’s amazing to realize that when he had his first true All-Star season in 1980, after what was already seven years in the Big Leagues, Yount was STILL only 24 years of age!
He was on cruise-control from then on, elevating his game to become one of the elite players in the American League, with 1982 the high point when he led the Brewers to the World Series and taking home his first MVP Award.
What a player!