Today’s blog post has a 1974 card for former Texas Ranger pitcher Rick Henninger, who played in the Big Leagues for only six games during the 1973 season: 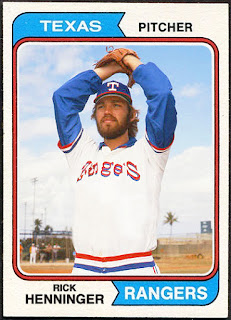 Henninger had a brief career to say the least, appearing in those six games between September 3rd and 24th in 1973 for a total of 23 innings, but it was successful, as he went on to post an earned run average of 2.74 while going 1-0.
However, though only 25 years of age and on a team you’d think could use a young arm, he’d never get a call-up again, spending the last three years of his pro career in the Rangers and Cleveland Indians systems before retiring after the 1975 season.
Posted by Giovanni Balistreri/ WTHBALLS at 6:16:00 AM