Here’s another “Nickname of the ‘70’s” card to add to the collection, a card for one of the preeminent pitchers of the era, Jim “Cakes” Palmer: 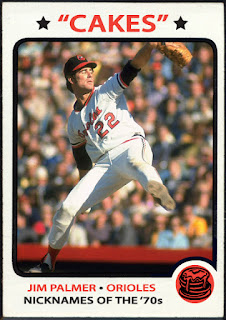 Apparently, Palmer got the nickname while still a young player, as he always ate pancakes on the day he was to pitch.
And here I thought he got that nickname as a shortened “Beefcake” for this unsettling underwear ads he did! As a kid growing up in NYC during the 1970’s, I totally remember a giant billboard in Times Square with Palmer sporting the speedos!
I used a 1973 template with the syrupy flapjacks icon since he was smack in the middle of a historic run of EIGHT 20-win seasons in nine years.
Just amazing to think he rattle off 175 wins in nine seasons between 1970 and 1978 while picking up three Cy Young Awards along with two E.R.A. titles along with 10 shutouts during the 1975 season, currently the last American League pitcher (and the last ever?) to do so.
I love seeing that 2.86 career earned run average over 19 Big League seasons!
Posted by John23 at 6:27:00 AM