As I mentioned earlier, I was always a fan designating an All-Star on the player's regular issue card, which was in practice by Topps between 1975 and 1981.
For all except that last year (1981), Topps simply picked the starting nine for each league of the previous year's All-Star game. Yet for some reason, they inexplicably forgot to slap the "All-Star" on the following three cards, 1975 Reggie Jackson, 1978 Richie Zisk and 1979 Freddie Patek, and to this day I have no idea why.
If anyone has any idea why this was done please let me know. It would put to rest a mystery that has been bouncing around in my head ever since. As a matter of fact, I remember back when the 1979 set came out, it had what seemed to be my entire elementary school searching for that ever elusive American League All-Star card! Every boy in that school was on a mission for that card, not knowing that it never existed.
Since many of you out there enjoy the practice of designing or making up your own cards, I took the liberty of "fixing" these mistakes myself and present them here. The left side represents what was actually issued, while the right side shows "what should have been."
It's especially sad for Patek since this would have been the only All-Star card of his career. For Zisk, it would have marked a two-year run on All-Star cards since he was correctly designated as an All-Star the following year, which was his only A.S. card to this point.
For some of us this actually matters, as sad as it may seem. ;) 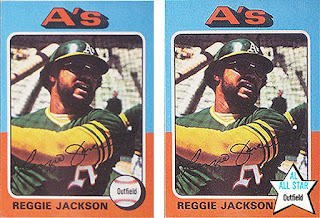 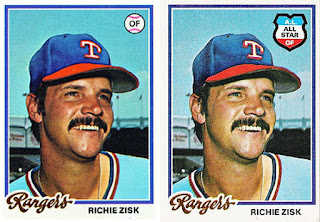 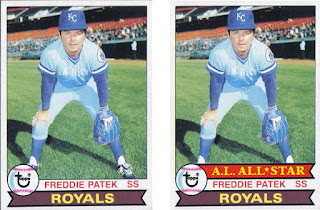