NICKNAMES OF THE 1970'S: "THE LITTLE GENERAL" JOHNNY BENCH

Here’s a long-overdue “nickname” card for the great Johnny Bench, the “Little General”, who led the Cincinnati Reds through their “Big Red Machine” juggernaut teams of the decade to consecutive World Championships in 1975-76: 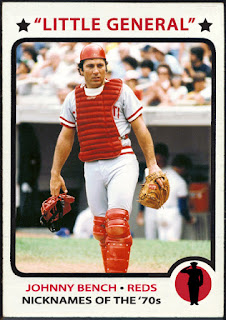 Though not really the most recognized nickname of the decade in baseball, Bench was tagged with it early on when it was clear this guy was a leader as well as a natural on the diamond.
All he would go on to do is win the National league Rookie of the Year as a 20-year old in 1968, win TWO Most Valuable Player Awards by the age of 24, and win those aforementioned championships by the age of 28.
Just an incredible career that took him straight to the Hall of Fame in his first year of eligibility in 1989, as if there was any chance of that NOT happening!
One of the all-time great catchers regardless of era.
Posted by John23 at 7:00:00 AM